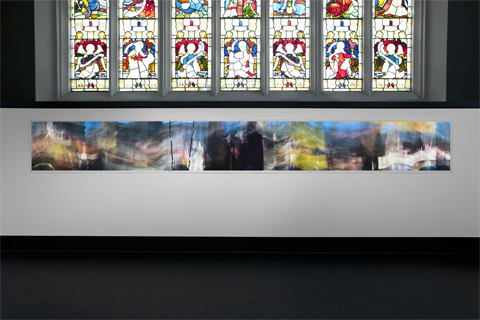 Uncontainable: Broken Stillness (group show)
Digital practices examining the borders of image making
With Boredomresearch, Susan Collins, David Cotterrell, Peter Hardie, Tim Head, Susan Sloan, Curated by Helen Sloan, director SCAN
The film-strip depicts a section of a 90 second handheld cinematic pan of the student protest march against budget cuts in Whitehall 9.12. 2010, transformed into one panoramic image of 6 m width, made with a conventional photographic camera.
As a demonstrator at the march I captured the dynamics of students and fellow staff moving through Whitehall, chanting and waving banners and flags in a unified expression of protest. For the duration of the exposure the celluloid moves past the lens in the hand-held camera, mirroring the movement of the crowd. This process abstracts and compresses the action revealing both chaos and order, yet details are enough to fix the image as a record of the real event.